A friend of mine had their Kobo Arc suddenly stop working.  The device would start booting then not make it past the boot animation (hang and not make it to the OS).  Of course they followed all the typical troubleshooting found on Kobo's Website with the link below.

However this doesn't help typically when you can't get to the OS level and my friend even booted into fastboot/recovery and did a full Factory Reset of the device.

However this doesn't help you if there is an issue with a corrupt file or if the built in storage is starting to degrade.  Remember it's 2019 and this device was released November 2012.

However I like a challenge and had a look at it.  Since it could get into fastboot we have some options.

We chose to just to re-flash the stock OS, which is fine by me, but we have to have an android dev setup on a device, which I happen to have.  If you don't you will need a PC with the Following setup

Now you can get the ADB tools from the SDK Manager but for my workflow and using the command line I like putting everything in one place so I went and downloaded the Platform-tools from the link below and extracted it to C:/ and renamed the folder to adb.

Open CMD prompt as an Administrator and CD to C:\adb  (Keep this open were going to need it later)

I downloaded the Stock ROM for the Arc from Kobo's website and copied it from my downloads folder to the adb folder on C:\ as shown below.

Then I booted the Arc up into fastboot and connected it with a good USB cable (I had issues with 2 cables hooking up the kobo as it was only charging and not detecting the adb connection).

IMPORTANT!!!  Windows should see the Kobo in fast boot mode but it won't be accessible.

From your administrator command prompt window type the following command

If your kobo is seen by Windows, you will see the following

Once that has been pushed to the device it will verify and either install or abort installation.  In my case it installed the firmware without an issue and we have a working Kobo Arc.

Where have all the Adobe Updates Gone?

For anyone not on creative cloud and are holding on to their old Adobe Creative Suite versions for dear life, having the original disks or images of the disks are fine but there are updates that are helpful for making the programs more stable.  To that end and until Adobe takes these links down you can get your software updates for your old creative suite programs from these two links. 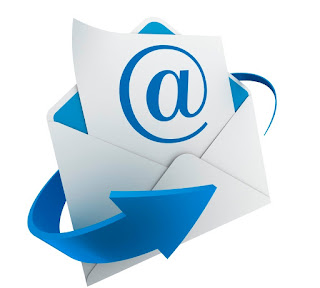 If your a google apps user or an organization that uses google apps and you would like to use a sendmail form on your 3rd party hosting provider such (greengeeks, bluehost, justhost, etc) you will need to add the following information to your hosting provider to allow your gsuite email to accept mail from the webhost.

If you don't do this your host will try to deliver the mail locally as the default is to associate all domain settings with the host, typically with a @ mx record for the localhost.  Below is a sample failed email from a webhost without the google mx records setup. 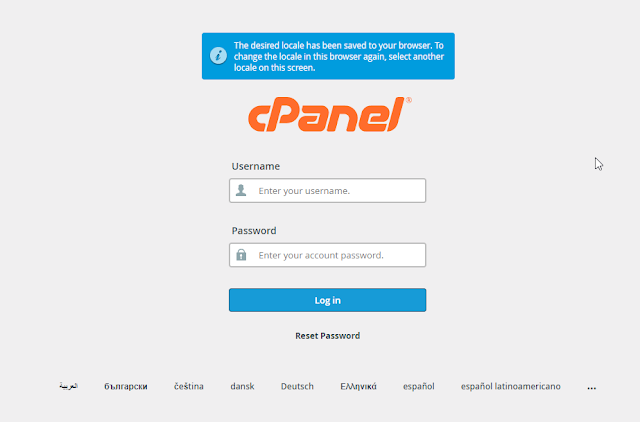 You need to modify your domain zone on the host.  Select Zone Editor

If there are any MX records setup, delete them.  Then add the following using zone editor. (change domain.ca to your domain).  You can also reference this google kb https://support.google.com/a/answer/140034?hl=en

then save your changes.  You should now be able to send email to within your organization, but to make it a little bit more secure you should login to your google admin account and limit the scope of your third party hosted server.  To do that go to

The same applies to Office 365 if your using it

There are other settings you can include such as SPF if your host supports it.

These settings should allow you to email use php sendmail for google apps and office 365.

How to renew the Apple Push Certificate for Cisco Meraki MDM 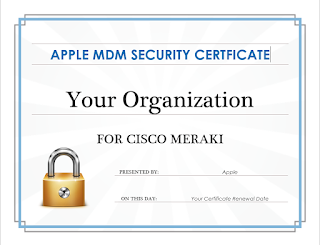 With Apple equipment when used with a MD such as Cisco meraki you have to update your push certificate every year otherwise your connection between the devices and your MDM will break and then you will be doing manual updates until you get the devices reset with your MDM.  Here is how you update your apple push certificate to your apple devices before the expiration date so you don't lose the connection between your MDM and your apple devices. 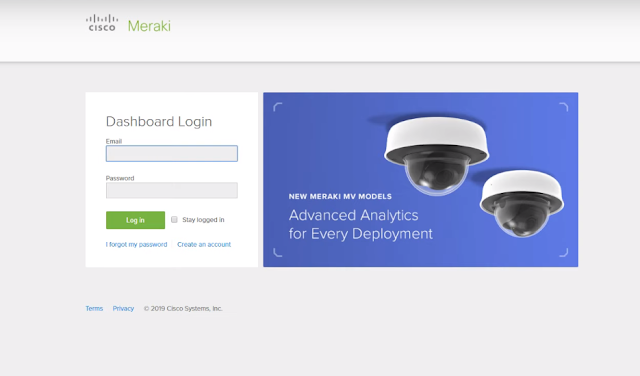 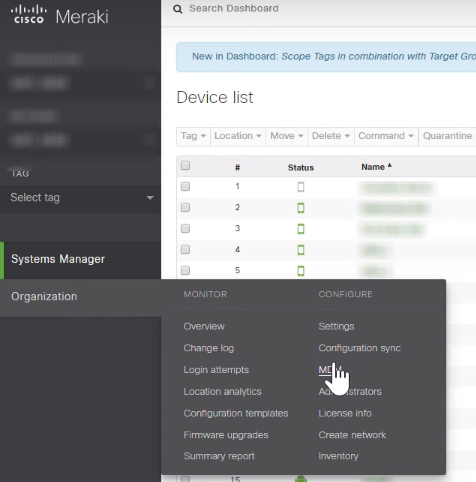 4.  Download your CSR File.  If you don't keep a clean house (or download folder) note the name and date of the file as it is very important.  In my case it is "Meraki_Apple_CSR (4).csr"

5. Then click on the link for the Apple Push Certificate Portal and login with the ID you are going to use or using with the MDM.  (It is the ID is tied to the CSR) so in this case mdmaccount@domain.ca.  Don't forget that you will need your 2FA device to be able to login. 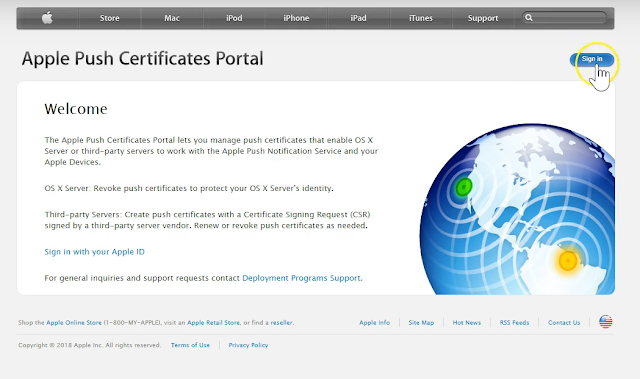 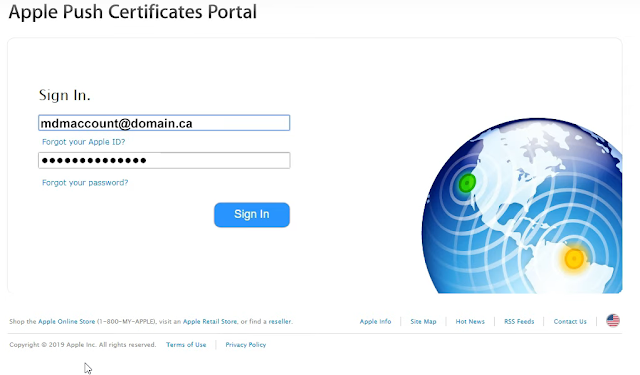 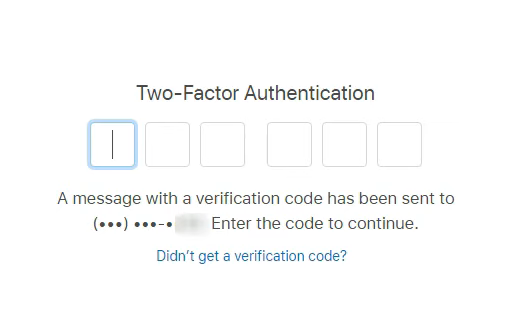 6.  Select Renew on the Certificate you want to renew.  Then upload the CSR; this is the file from step 4 - "Meraki_Apple_CSR (4).csr" 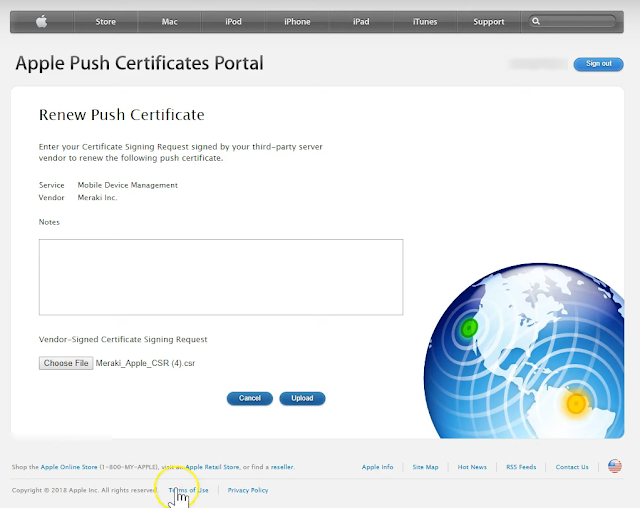 7.  Then once done you will download your new Certificate to use with your MDM.  Again make note of the name and date if you don't keep things tidy.  In my case it is "MDM_ Meraki Inc._Certificate (1).pem" 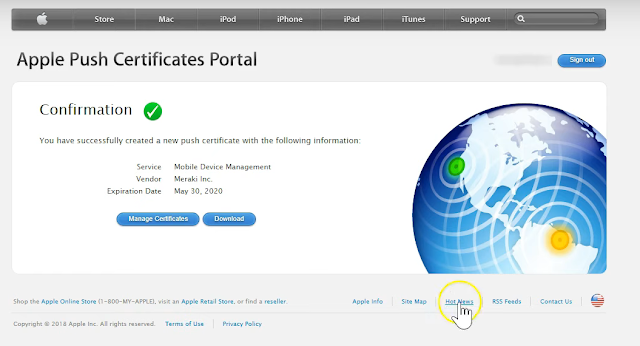 8. Now go back to your meraki mdm and enter in the email address and upload the certificate we got from apple (MDM_ Meraki Inc._Certificate (1).pem)

10.  Now your certificate expiry should be from 1 year as shown below

You can view a youtube video of the process here