My wife surprised me when she said let's get you a HD TV, so I looked on line what the best deals and budgeted about $800 for a HD TV. Here were the main specs I was looking for.

I was considering a 37" Samsung or 40" Samsung along with a 40" Toshiba and a 42" Insignia were also in the running. I we went to (BestBuy because it was closer to our home) to have a physical look at the TV's. The picture in all the TV's were good, and from the specs it was easy to see why. I had my heart set on the 40" Samsung but the 42" Insignia had some better specs then what the Samsung had and it was bigger and 120hz.

My wife and I discussed it and I told her I would prefer to buy the Samsung, she thought the Insignia was good and tried to talk me into that one. I just couldn't do it the Insignia set is a great deal, but I haven't heard to much about them and I knew the Samsungs have an excellent reputation, and from what I read they are highly recommended. I also prefer because it had the 12bit video processor and better contrast ratio, and slightly faster screen. So my wife made my decision for me, she had picked out the 46" Samsung because she thought the 40" was to small and that was what I was leaning towards. Checking the specs on the TV we agreed it was the one to get and it was only $200.00 more then the original budget and that it was worth it. We went to ask someone to grab one for us but they only had one left and it was in a open box, so my wife (the shrewd negotiator that she is) got a discounted price on the tv, a 4 year warrenty on the TV from the Store for $80.00 and a TV Stand (They also gave us a HDMI cable, surge protector and cleaning cloth and cleaner for no cost).

All in all I am very pleased with the Samsung 46" 1080p LCD HDTV (LN46B540). The scaling on the DVD's to 1080i is fantastic, the picture is super sharp and clear. Setup took no time at all and I can't wait to build a media centre to plug into the TV. I recommend this TV with no hesitation, and so far it's been a fantastic experience.
- November 30, 2009 No comments: 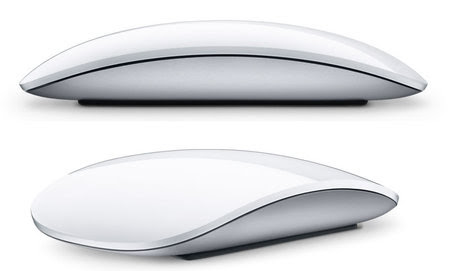 However this was the only thing about the mouse I had an issue with. I did love everything else about the mouse. The functionality is excellent, the Left and Right clicking is no issue what so ever. All you do is press down and the mouse detects what side your pressing on you don't need to lift your fingers to press or anything like that. The best part is the horizontal and vertical scrolling. It is by far the best mouse I have ever used for scrolling with a scroll wheel. The mouse doesn't have a scroll wheel but beats out the scrolling on every mouse I have ever used including my current Logitech G7 Wireless Laser Mouse. The scrolling speed is variable rated. So The web browser, cover flow will scroll as fast as you move your finger. Absolutely brilliant! If the mouse was more comfortable I would totally buy one for my Mac System.

The Magic Mouse is a brilliant invention, and Apple almost got it right, the mouse is very pretty, has excellent functionality, but is in my opinion, uncomfortable. Maybe I can get use to it? Then again maybe not.
- November 26, 2009 No comments: