I wrote in my blog on April 23 a process for setting up storage spaces on Windows Server 2012R2 and when I went to use it on my production machine for a scheduled reconfiguration I ran into issues because of some differences in the hardware setup.  It just goes to show that no matter how well you try plan, if something is different in your lab vs production it's going to bite you.

However when I went to do to the reconfiguration for Storage Spaces to a Tiered Storage Spaces Configuration to enable Mirroring on the 2 NVMe Drives on the server and configuring 8 HDD Drives in a mirrored setup as well.  So what I did first was a full backup (export) of 3 Hyper-V virtual machines, which took the most time totaling 1TB of Data and took 3 hours to copy off to a NAS (the local backup drive was unavailable).

Once the server reconfiguration started it actually went very well till we got to setting up the Storage Pool.

Detach the current VHD you have setup with storage spaces.  Go to Storage Pools under Volumes and right click on the virtual disk and select Detach Virtual Disk. 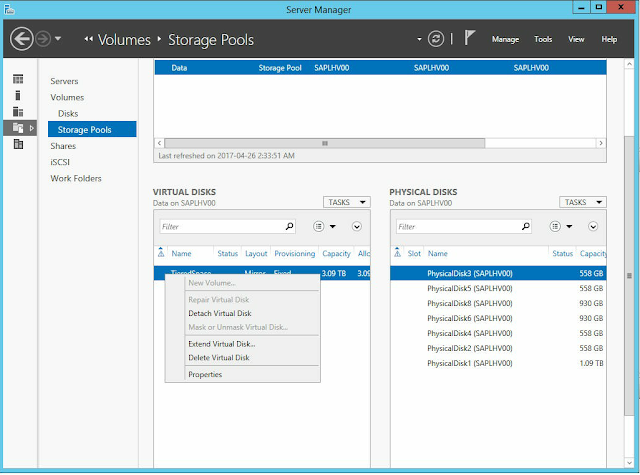 Then delete the virtual disk and remove the storage pool.  Once that is done you will need to setup the storage spaces pool and the disk in powershell, My disk list actually had an issue where the MediaType of two of my disks were set as unknown.

The powershell commands I used to create my storage spaces pool.

This allows me to include the unknown disks in the pool that Storage Spaces doesn't recognize.

Once the disks are in the Storage Pool, I need to defined the 2 undefined disks (in this case they are hdd drives) so I used this powershell command.

As you can see storage spaces sees 2 SSD Media Types and 6 HDD Drives.  If you try to use the gui and setup the storage spaces in a Mirror configuration, you will get an error.  For some reason at least on the server I'm working on the GUI only sees one SSD.  So back to Powershell I used the following commands to create the Virtual Disk.

This will create the virtual disk and it will show up in Storage Spaces and then you can attach the disk in Storage Spaces.  You can then expand the Virtual Disk to use the full extent of the Storage Space if you want.  I have a total allocated space of 3.09 TB and according to CrystalDisk Benchmark it sure looks like it's running properly (logging into the virtual servers also is way faster). 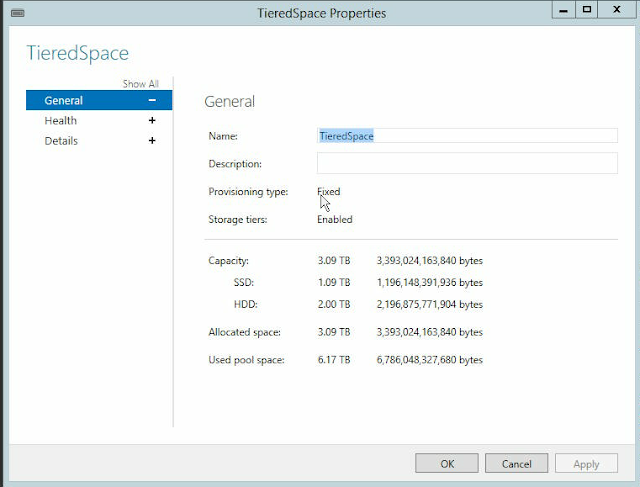 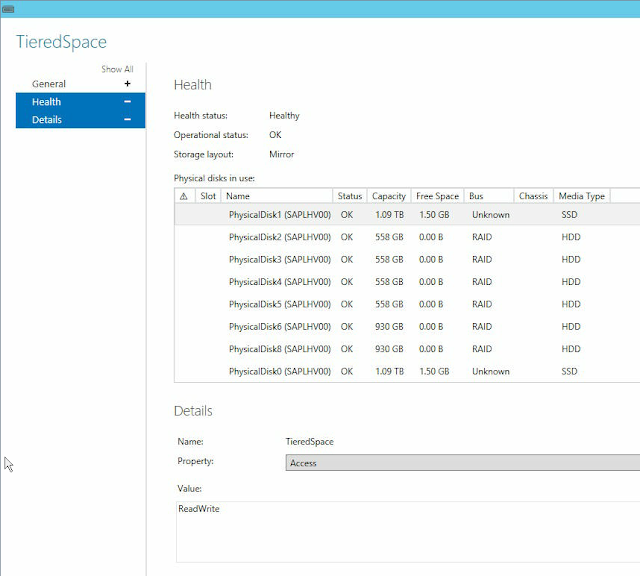 As you can see all the drives are in good health it sees all the NVMe SSDs.  I haven't verified what happens when I pull out a drive but am expecting it to work well (I'll have to schedule another test to verify this).

Here is are some benchmarks one REFS and the other NTFS.  I'm going to stay with NTFS for now but when we update to server 2016 I will probably push to use REFS.

In this post I am going to cover how to create a storage spaces tiered storage array, format it to use ReFS and have Server 2012R2 Mount the drive after/when the system is restarted.  You will have to have the Server 2012R2 installed with the Hyper-V role added before we begin.

When installed you can see from the GUI 4 disks that you have available in my case I have 4 but only three can be pooled because in this list my OS disk is being shown in here.

This powershell command shows what disks can be pooled. #List all disks that can be pooled and output in table format (format-table)
Get-PhysicalDisk -CanPool $True | ftFriendlyName,OperationalStatus,Size,MediaType

The results of the powershell commands are shown below.

To make our lives easier we create a variable with unspecified disks.

#Store all physical disks that can be pooled into a variable, $pd
$pd = (Get-PhysicalDisk -CanPool $True | Where MediaType -NE UnSpecified)

So we have 2 types of disks shown in our storage pool.  SSD and HDD

We run the following commands to create a tiered storage pool.  This will create a ssd pool and hdd pool

Now we can switch to the gui and create our VHD which will mount to the HOST OS.  We will also be able to create a writeback cache.  From here we can start the Wizard in the GUI.

Now here is where we can select the option to create tiered storage spaces and name your virtual disk.

Here is where you can specify what kind of setup you want in my case simple or mirrored. However I could not do mirrored as I did not have enough physical disks available so for the purposes of this post I went with simple.  Though for performance and redundancy I would select mirrored.  StorageSpaces allows for 3 types of resilient storage.

Resilient storage. Storage Spaces provides three storage layouts (also known as resiliency types):
Once you go forward you will see something like this for the following screen. 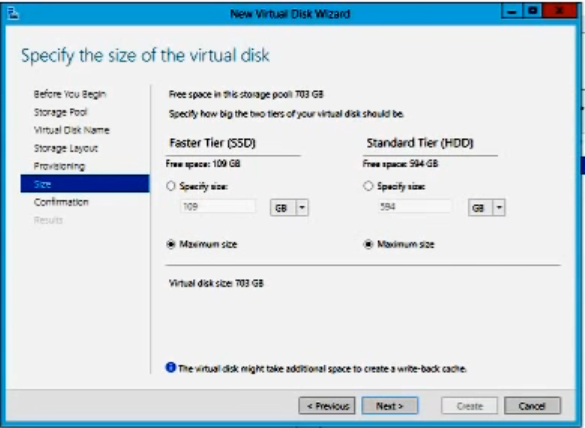 You will see an alert about the write-back cache, and I will end up with a 700GB drive 1 x 120 GB SSD and 2 x 320 GB HDD.  Now because this lab is a simple setup (3 drives) and if I wanted any kind of redundancy (which I would want for a production environment) I would want to use a mirror setup for the storage spaces instead of simple for the storage layout.

I was unable to use the procedure above to work with NVMe based SAS drives. If you want to know how that was setup see my post How to setup Storage Tiers on Server 2012R2 with Powershell and NVMe Drives I go through step by step on how to setup the storage spaces using powershell.

and for referencing some of the powershell commands I used checkout

You can also view the whole process on my youtube channel. https://www.youtube.com/watch?v=hNhX65DDaT4 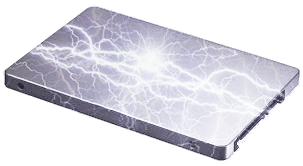 Solid State Drives or SSD's as they are commonly referred to are now the easiest and cheapest way to bring new life to your old computer.  Many of the SSD's max out the bandwidth provided by the bus that your computer connects to the hard drive.  On MacOS though if your lucky enough to have an older mac then you can upgrade with any SSD you would like but what you don't know is that Apple doesn't enable TRIM by default even though most SSD's support TRIM.

Why do you want Trim?  I'm not going to go into it in detail because Techspot has a great article you can read in detail here

Basically SSD's can not directly over write cells with new data, but must first be erase it at the block level.  This is called garbage collection.  The flash memory uses over provisioning used to improve performance and longevity of the SSD.

Here is what you need to do to enable Trim on your SSD on your Mac.

1. Close all programs except for Terminal if you

First you can check and see it if Trim is enabled.  You can do this 2 ways.

You will get a response of TRIM Support: Yes or No 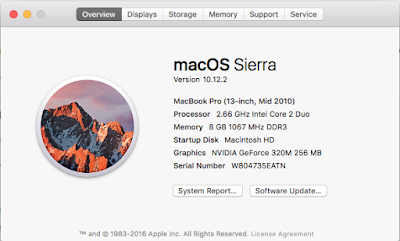 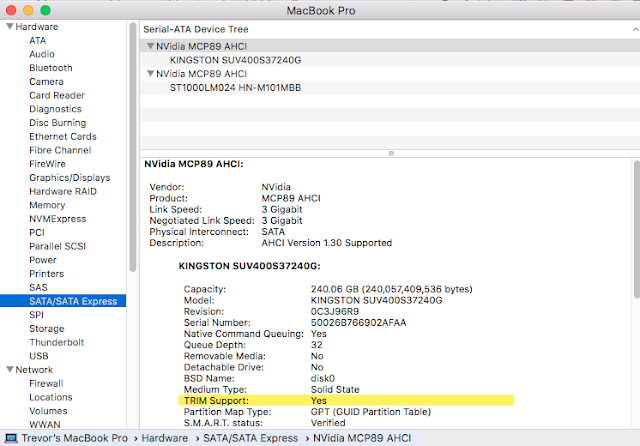 If you get a Yes you don't need to do anything trim is enabled.

If you get a No type the following command.

Then answer yes to the two questions and it will reboot.

Trim will be enabled after the reboot.  You can verify this by using the terminal command
system_profiler SPSerialATADataType | grep 'TRIM' or checking the system report.
- April 12, 2017