Replacing a failed Cisco Meraki Switch in a Stack

On Jan 6th, one of our the core Meraki switches in the switch stack failed; causing an outage on one of our production hyper-v cluster (because we did not have a redundant network LAGG setup for the storage. It was decided at the time to just have a backup port.) once the port was switched from the dead switch to one of the other working switches the problem was quickly remedied. However now the organization was down a switch and we did need to get it set back up So after trying to reset the switch, and trying anything and everything to bring it back I contacted Meraki support.

To contact meraki support you need your customer number which is located at the bottom of your sign in on the top right of the meraki administration site as shown below.

After calling support and jumping through the hoops (turning on/off again, etc) they sent out a new switch. After receiving the switch I put it in placed and replaced it using documentation from https://documentation.meraki.com/MS/Stacking/Switch_Stacks

The following steps will clone the original stack member and remove it from the stack:

Connect the new switch to the network; the network should have access to the internet for the switch registration.

Once claimed our licence gave an error message, as we were Overprovisioned on our licencing, which is ok so long as you don't leave it to long. I connected the device via port 1 on one of the other switches which allowed the switch to connect to the Meraki Cloud.

I then cloned the switch using the stack clone and replace member
Now we have a fairly simple network setup and I don't recall needing to bind any profiles meraki has listed in the switch stacks documentation it was pretty much clone dead switch settings to new switch.  Once that was done I rebooted the switch and it came back online; I then connected the stack cables which caused a network outage. I then decided to wait as I was unsure why that had occurred, the switch still had access to the meraki cloud via port 1 and when setting up the stack originally, having the stack cables plugged in didn't cause an issue.  So I shut off the replacement switch to work on it later that night.

I came back at 11:30 pm that night plugged in the stack cables and turned the switch on and it went into the stack with no problem.   I removed the old dead switch from the meraki cloud which fixed the licensing notice we were getting.  I then added 2 new laggs to the x240 switches for the 10GIG link for the Hyper-V iscsi storage. So now they are LACP lagged into stacked switches for additional failover protection; just now on 10Gig instead of 1Gig.

Dealing with Meraki to get the switch replaced was actually a pretty good experience and would not hesitate recommending Meraki to any organization that can afford to use them.  They mailed the new switch out to us right away and worked with us and our timeline to get the switch put into place and the dead switch sent back.  Replacing the switch was fairly simple and they had pretty good instructions despite the minor issues I experienced.

Back in September/October 2019 I was tasked with finding a solution for a point of sale system to replace and old cash register system.  The cash register system we were using couldn't be purchased any longer with the features we currently had in place and required.  It was a simple cash register it had generalized logins for staff via id number, it did not tie into any point of sale system (Chase, Moneris, etc).  So we decided to look at a number of Point Of Sale Systems,

The current system had the following requirements.

After setting up and trying of several point of sale systems some open source and several paid systems the one we settled on was VEND.

VEND is a small business Point of Sale system that we can use for what we require.

Vend's Features:
I asked the customer services supervisor Jordan Moss to make sure it did all the features her department required.  After the initial setup, Jordan was able to setup the point of sale systems, verify the reporting and user management information was just what they required.  She setup all the different payment types for both locations allowing me to further investigate how to setup the systems with the payment system and receipt printer.    The feature we were only interested in was the sales and reporting.  Vend got all these check boxes for us and now I could focus on the technical process and work out the issues with the desired setup.

For the most part my research into this showed that you should setup a point of sale from a single unit (machine) that has a sales terminal and debit/credit machine tied to that individual device (called semi-integrated mode).  Typically you would setup a payment system in semi-integrated mode, which is a checkout method used by retailers which integrates payment processing and POS software in a secure & streamlined network configuration. Semi-Integration allows retailers to accept Chip/EMV credit card and debit card payments, as well account for inventory changes, returns, voided transactions and other payment functions.  Vend supports 2 chase point of sale terminals in Canada for semi-integrated mode, but they are not universally compatible.  So if you want to use iOS from Apple you need to go with the Chase iCT250.  If you want to go with a wired Windows system you need to go with the Moneris Desk 5000.  We had got the Chase iCT250 (wired) but it was assumed we were going to be using an iPad for a sales terminal; so it would not semi-integrate with VEND on windows.


This turned out to be a good thing as for the Semi-integrated mode to work you have to tie the debit machine to a single pay station therefore eliminating the ability of using the second machine with the one debit terminal.  So we are not working with the payment system in semi-integrated mode.  It was decided to keep the Chase system because if we did want to setup a stand alone payment terminal because of the space requirements a 9.7" ipad might be the best choice and since we could not utilize semi-integrated mode anyways because it can't be used with more then one point of sale system as shown above.

Since we wanted to use 2 workstations that would double as point of sale stations using one receipt printer and one payment terminal; I started using my imagination and was looking at some documentation for networked Epson receipt printers and I came across this.  It gave me an idea for how to handle this point of sale setup.

This diagram came from an Epson TM-T88IV manual and I drew inspiration to try setup the point of sale between two workstations.  The system is simple, setup the default Windows printer to be the default printer to be used with VEND.  This will allow the cash drawer to open when VEND is logged in and in use.  There is no changing the printer when you go to print, everything on the system is setup to work as a point of sale system.  This identically done on both systems that will be using the POS software.  Since the same slip printer would be required to print off sips from the ILS (See my post about setting up slip printing in horizon).

Setting up the cash drawer was pretty easy with the networked receipt printer.  The
cash drawer we selected was the CBM 2000 Universal 24V cash drawer.  The cash drawer connected with the RJ12 to the TM88-V DK port and worked flawlessly though the driver. 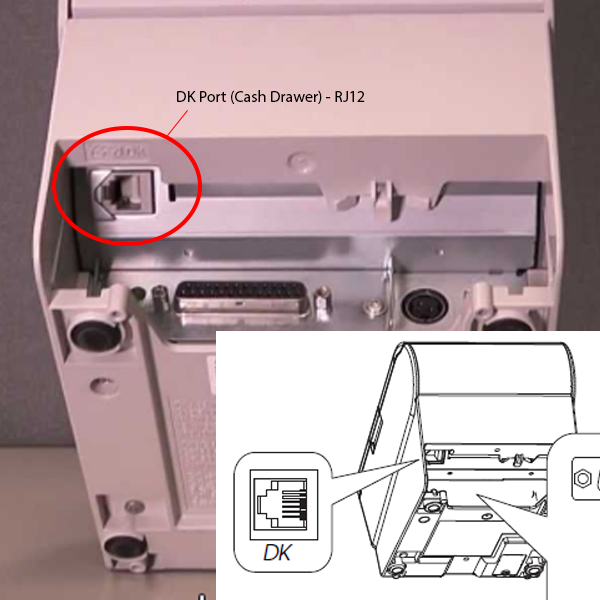 After you install the printer driver it is located in Printer Preferences as shown below.


Even after getting the printer setup and installed; the setup with the Horizon ILS created a couple of issues that had to be resolved to get the system setup with the requirements we started with.

Issues to resolve
The first issue was easy to resolve, since this was a network based 80mm printer, I created 2 printers on the client, one opens the cash drawer at the end of the document as shown above the other does not.  Both printers must be installed on both clients, with the Horizon Slip Printer being setup for use specifically for the ILS slip/receipt printing and the other Epson TM88-V is setup as the default printer for VEND and takes care of opening the cash drawer for the VEND point of sale system as shown below.


By default both the Epson TM88-V and the Horizon Slip Printer would print the full 297mm length by default regardless of how big the receipt was being printed.  To stop that from happening I setup a new paper size of 80mm wide by 58mm high.  I set this paper size to be the default for both printers as they were printing the full 297mm.  To make this change you use the Epson TM88-V utilities that are installed with the driver.  Once you make these changes, you can add other printers etc, but I've experienced issues where if you go to print to another printer, the printer prints to the size of the 80mm receipt on a letter size piece of paper unless you select printer properties and re-select letter.

A caveat with this setup according to VEND is that we could encounter out of order or duplicate numbering with our payment processing; though this has not come about in testing, the main thing I had noticed was the browser not recognizing that the system had been closed and needed to be re-opened.  Deleting the browsers cookies or re-syncing VEND's local data with the browser seems to resolve this issue.

Overall the staff and managers quite like the setup; and think it is easy for them to use and manage.  It hasn't quite been a month that they have been using it but I have my fingers crossed!
- January 21, 2020

Setting up and configuring an Epson T88V with an Ethernet adapter

Setting up and configuring an Epson T88V with an Ethernet adapter 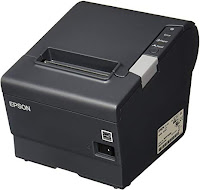 Installing an Epson UB-E04 Print server on a TM V is relatively easy.  It is about a 15 minute process but you have to change the DSW2 Switch on port 8 from off to on.  The reason for the upgrade had to do with setting up a remote office that had to have a non-dedicated POS system.  Typically you would have a dedicated POS system whether it is an iPad, PC or other sort of system.  You can read my follow up post on the reasons and rationale for this system setup.  The TMV that I was working with had a built in RS-232 card and I replaced it with a UB-E04 print server I kept from a dead restick TMIV.  This post applies for the Epson TM-III, TM-IV, and TM-V 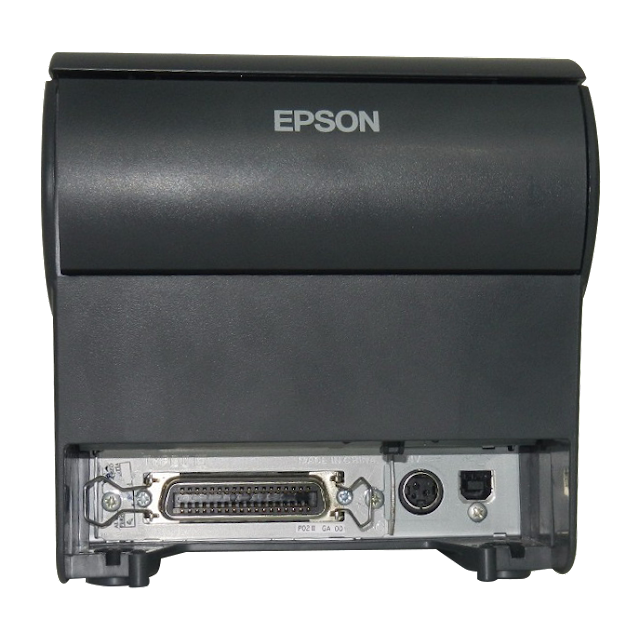 Step 2 - Open up and Flip the Dip Switch in DSW2 from off to on. 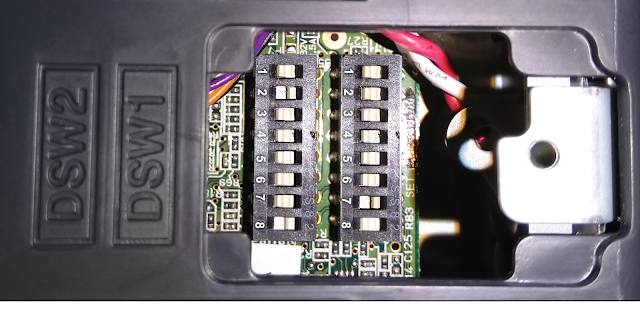 Once you do that you should be able to see the printer on the network, if you don't then you have a mi-configuration on your DSW switches.